Julian Kampfschulte is a 7-year-old boy with a big heart and an even bigger smile. He loves drawing, playing pretend, Legos, and video games. He loves playing with and annoying his two sisters, and he really loves his mom and dad. Little Julian should have the rest of his life ahead of him to grow and play.

However, his family received a devastating diagnosis—Julian has a rare genetic degenerative brain disease known as Adrenoleukodystrophy (ALD). The disease ravages his brain.  His symptoms grow worse, including blindness, deafness, seizures, loss of muscle control, and progressive dementia. This relentless downward spiral will lead to permanent disability and death for Julian.  It has already begun to affect his vision and he can no longer hear.  All of this happened in only a few weeks.

In the coming months, Julian’s family needed a tremendous amount of support. There were day-to-day needs, medical bills, medical equipment to purchase, household needs, loss of work and memories to create. There is no way to know the length of time this little boy will be with his family, and what expenses will accumulate.

How did we help a family headed on a journey to say goodbye?

Our goal was to provide them with resources to help keep Julian as comfortable as possible and help the family enjoy and treasure their remaining time together; we created a GoFundMe page in which we raised $78,000, with a starting goal of $50,000. With all your aid and support, we were able to give the Kampfshulte family a blessing in order to cherish their time left together. Your generous donations went directly to pay bills, buy supplies, create memories, and help with lost wages over this overwhelmingly emotional time. Your donation continues to bless them along the way; thank you for keeping Julian Kampfschulte and his family in your prayers.

Handicapped a Van for a family in need.

Thomas Richards Charity was able to handicap this van for a family in need.

The Thomas Richards Charity board and family members came together to clean up the yard of an amazing Veteran. We organized the yard clean up for a Disabled Vietnam Vet, Jerry. On May 31,2015 in the Rochester Hills area, we all met and pitched in together to help tidy up Jerry’s yard. Jerry keeps an amazing home and yard but due to an illness and surgery this month he wasn’t able to take care of his yard. Thank you to all those who came out to support the cause, Jerry, and Veterans like him. 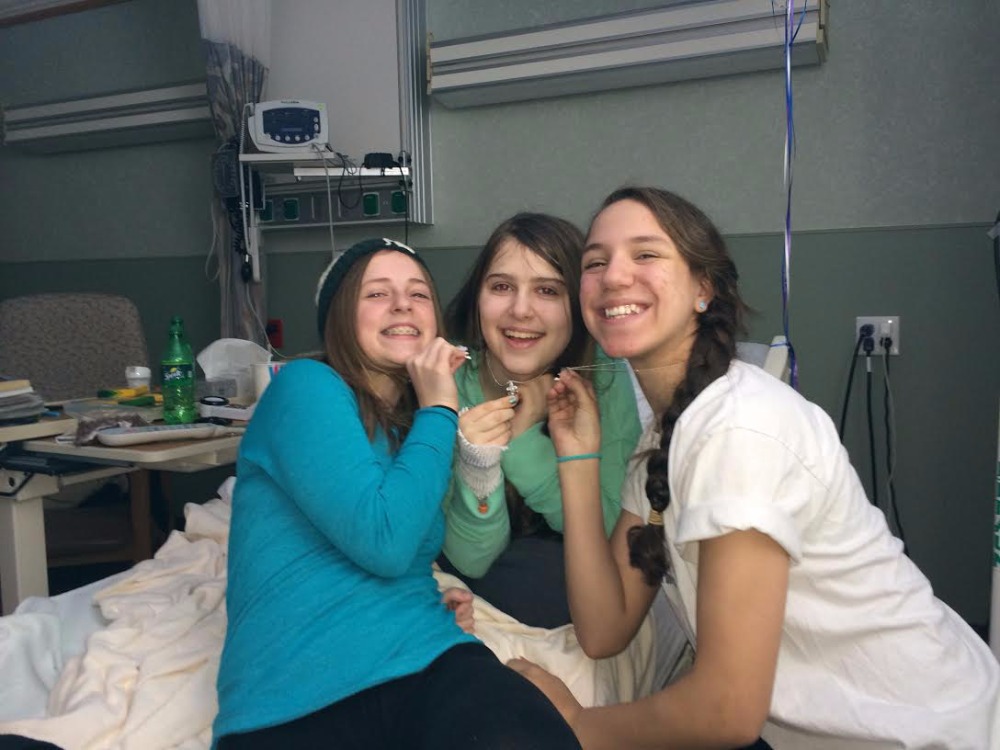 2015’s Golf Outing put on by the Matt Mascato Charity was in support of helping Izzy to be pain free and to fund her surgery. The Golf Outing was held at Sylvan Glen Golf Course and Camp Ticonderoga on July 31, 2015.Because of your generous donations and support, Izzy’s surgery was able to occur. Thomas Richards Charity thanks you for your continued support. Please continue to read to see more about Izzy’s story, condition, and results. Izzy’s problem’s all started with a 6-week battle with bronchitis and sinus infections in November of 2012. When Izzy, then 12 years old, finally began to feel better, she was left with a constant headache.  She saw multiple specialists, at University of Michigan Hospital, Beaumont Hospital, and Michigan Head and Neurological Institute. She went through endless tests – MRI’s, MRA’s, MRV’s, EEG’s, heart tests, constant blood work, nerve blocks in her temples, forehead, and back of her head, and even tried Botox injections. She has tried spinal taps, which always ended with a painful blood patch to try to help the additional spinal headache that would follow the initial spinal tap. All in hopes that it would break her constant headache. She tried what seemed like hundreds of medications with no results to end the head pain. She was even hospitalized to try more invasive prescription treatments, spending her 15th birthday there, all to leave without any answers. Doctors, who were said to be the “best in the world”, always repeating that Izzy was a complicated case, a mystery.

For these three and a half years Izzy’s parents were paying up to $1400.00 a month for insurance alone. Dr. Amerlak in Texas, after reviewing all of Izzy’s medical history, believed that he could help Izzy. Izzy flew to Texas in February of 2015 and had two appointments with Dr. Amerlak. One performing specialized nerve blocks that left Izzy with no pain in her temples for the first time in three years! (This “pain free” period lasted for three hours; the longest it would be expected to last was four.) Two days later, at the second appointment, he then performed specialized deep Botox injections to her face, neck, and head.

The next step was to have nerve decompression surgery that would hopefully allow Izzy, then 16 years old, to have a headache free day. The surgery was not covered by insurance.

Izzy’s strength and perseverance through this has been remarkable. In spite of the constant head pain she has been able to remain an A/B student and is determined to hopefully attend Michigan State University one day to become a neuropsychologist. She has goals, she has plans, and with this surgery it will continue to help her achieve them.

The surgery was a success and with a long recovery process Izzy ended up being free of her chronic headache. Izzy is now a normal girl studying at Oakland University and working in the medical field. A huge thank you to everyone who helped make Izzy’s life normal again. In 2014 the Matt Moscato Charity golf outing was held the same weekend as the Rochester High School class of 1989 25th reunion. The 2014 recipient was Lexi Mancini, daughter of Allyson Mancini (Blaker) class of 89. Lexi is a sweet 14 year old girl who needed our help with the rest of her life…..
Most girls her age have basic teen-age concerns: playing sports, having sleepover parties, and counting the minutes until the next school dance. When Lexi was one year old she was diagnosed with Turner Syndrome, a chromosomal disorder that affects many parts of the body. She produces no hormones of any kind. Lexi has been receiving growth hormone injections since she was two years old, and began taking estrogen last year. She will have to continue to take hormones (estrogen and progesterone) for the rest of her life. Future concerns from Turner Syndrome are life-threatening heart issues and kidney problems, along with increased risks for certain cancers. This aliment alone would be enough for anyone to struggle a lifetime with; however, Lexi is also afflicted with Common Variable Immune Deficiency (CVID), a life threatening and incurable disorder. Something as common as the flu or pneumonia can lead patients to hospitalization and in worse cases, death. This creates many problems. First and foremost, the high risk of infection. She has to be wary all the time of what she touches, who she touches. She experiences additional side effects such as joint inflammation, reoccurring gastrointestinal pain, and weight loss. Future concerns from the immune deficiency are enlarged spleen and lymph nodes, lung tissue damage, autoimmune diseases, and an increased risk of cancer, especially cancer of the lymphoid system, skin and the gastrointestinal tract. She takes numerous prescription medications on a daily basis along with numerous supplements.
She needs IV infusions of gamma globulin every three weeks for the rest of her life, which takes approximately six hours. Amazingly, Lexi is a 4.2 student. Her treatments, although necessary, are not pain-free, nor risk-free. Side effects range from mild headaches, which she experiences, to severe anaphylactic shock and death, but without them she could die.
She will never be “healed”.The family has changed health insurance four times since 2011. Insurance companies don’t want to cover her because her illness is considered “catastrophic.” Every time her family changes insurance, there is a risk of missing a treatment. Insurance is billed on avg. 250,000 + a year the family has paid on avg. $28,000 a year, with no end in sight. When she turned 18, there was no way to know what would happen to her coverage. With the United States insurance in question we had no idea what the cost would and will be in the future.
In order to support Lexi, Thomas Richards Charity supported the Matt Moscato Charity golf outing; it was held on July 25, 2014 at Sylvan Glen Golf Course with lunch at Camp Ticonderoga in Troy, Michigan. The outing was a success and we raised a total of $16,778 that went directly to Lexi’s Trust to support her prescription medications, treatments, and medical bills. We thank you to all those who supported, Lexi couldn’t be supported without your help. Thank you for helping us help her.
Page 6 of 10« First«...45678...»Last »